Paybacks are you know what! 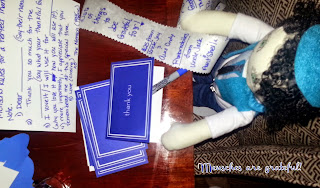 I am not proud of this. I distinctly remember ripping through a huge stack of presents only to be disappointed at least once in my childhood. I also remember the time that my mom sent me back to college after Thanksgiving with all 8 of my Hanukkah gifts as we wouldn't be seeing each other until after the holiday. I should have been grateful that at that ripe old age that my parents were still giving me gifts at all in addition to my tuition, sorority dues, housing, clothing, etc, etc..., I should have opened them on the appropriate nights of Hanukkah and been happy to have a treat each night. Instead, I opened just one early. It was a cookbook and, by 90's standards, it looked dated with its brown spiral cover. I didn't like it, so I opened "just one more." Different gift, same ingratitude. So I opened just one more. I think you get where this is going. In a matter of minutes, I was sitting with a pile of opened gifts, paper strewn everywhere, feeling ungrateful. Ungrateful for the carefully wrapped gifts, ungrateful for the thought and care that went into them, ungrateful for the house around me, even ungrateful for the 20 year old body that I thought was too fat (it was, but I'd take it now because 20 year old fat still beats 38 year old medium, but that is a different story). My roommates stared at me in horror---rightfully so. In that moment I had a turning point.

It wasn't instantaneous. Believe me, there were some BIG missteps long the way. I am not sure that my parents would see me as grateful even today. But I am, and it began right there. I started becoming grateful. Now I really count myself lucky. I am so grateful for all that my parents gave me (the "presents"and for the presence) and for all that my husband provides. I feel like we are rich, though my husband reminds me we are middle-class. This isn't to say I am a braggart or immodest. I just realize how much we have, and I am so grateful for every last bit of it. So I want my kids to feel the same.

Well, you know what they say about paybacks? On Tuesday the girls got big gifts for the first night. A got a Barbie Dream House. It is large and colorful and took hours for my husband to assemble. N received a pair of tall black Uggs and clothing. The Uggs alone cost more than the Dream House, but they were small and black--far less fun. N knew this and handled herself with a lot of grace and gratitude. She kept it way classier than I had as a child (for which I am grateful) but there was a sadness in her eyes. Later she asked if she would be getting any toys. I feel so guilty. Silly right? The girl has boots more expensive than mine, but I am wrought with grief that she didn't open something flashier.

Here is the problem: I want to give them everything and simultaneously want them to feel immense gratitude for even small things. I know that these goals are incongruous with each other. You can't give someone everything and expect them to be grateful for the little things. As I mentioned yesterday, the girls didn't get a gift from us last night. We did let them open some small gifts that were sent from aunts and uncles and a former babysitter. After opening them they didn't look as satisfied as I had hoped. Where was the glow from knowing they gave to charity? Again, they were way nicer than I had been as a child, but still not as grateful as I had hoped.

I had them list everything that the had received so far. As they were listing, I do think they both realized that they had gotten quite a lot by any standards and a massive amount considering it was only day two. To my great joy, A also mentioned that she received gifts to give to charity (not the glow I wanted, but a glimmer was there)! Perhaps it was like me in college--the moment I opened myself to gratitude. I was not yet there, but I was on the road. I hope they are too.

Today, the mensch showed some gratitude of his own. The girls found him writing thank you notes this morning with a "gratitude list" (This is ironic given that the mensch plans were made weeks ago).

By the way about that brown spiral cook book: It is one of my most prized possessions. It taught me to make spinach artichoke dip, mini cheesecakes, "my" famous tenderloin, and the food I eventually wooed my husband with. It is splattered and stained and so well-loved that you would never believe that its owner once discounted the book on its cover.

Suzanne! You just won stationery at my place! Will you please send me your mailing address at rasjacobson.ny@gmail.com?

Our Life at 31-derful!
Hi, I am S. Long ago I planned to study social work, get a law degree, and marry a fellow professional when I graduated. We were supposed to effortlessly have two awesome careers, save the world, and a make family. I did most of that--I have a bachelors and masters in social work, married my law school sweetheart, worked for a decade as a children's advocacy attorney, and we do have two precious girls!! To my surprise, my career is mostly a SAHM and most days all I try to "save" is my own sanity! For two decades I have been a near professional volunteer in addition to my actual work. I briefly tried to be an "event stylist." I am currently using this blog to help me figure out my next big plan.

Looking for something else 31-derful?